The two groups in the 11 a side were drawn with Glenbeigh, Naomh Mhuire Killorglin, Cromane and Kilgobnet. The second group was comprised of Cullina, Nagle Rice Milltown, Castlemaine and Caragh Lake.In each group, all teams played three games each. These games were fantastic games to watch, with some great scores taken and even better defending. At the end of the round robin format, Glenbeigh, Naomh Mhuire, Nagle Rice and Cullina qualified for the semi finals. We got two tight semi finals with Glenbeigh and Noamh Mhuire meeting in the final. In a game that both teams showed some excellent inter passing and speed in moving the ball from one end of the field to the other, the only seperation in the final was the accuracy of the Glenbeigh forwards. After an excellent day of football, Glenbeigh are the inaugural 11 a side Mid Kerry Primary Schools Girls Champions.

Thanks to Milltown Castlemaine for the use of their grounds, teachers, parents and coaches of all the teams. Many thanks to Mike Hickey, Cliona Coffey and Amy Foley who all gave a superb display of reffing. 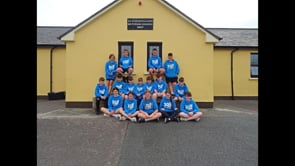